Published by; Elisabetta Casalotti. elisabetta.casalotti@gmail.com
I was asked to choose a painting and write my thoughts.
An Indian of the Amazon is wandering around in a big city, inside a limo.

Do I prefer the city or nature?
Animals are innocent. We are animals as well, but evolved ones.
All the rest is mere visions that just suit our needs.
Would the Indian succumb to the temptations? Why should he look like Iggy Pop? (Not that I ever particularly enjoyed Iggy Pop.)
All we are is just memories and experiences.
Perhaps history and the things we have been taught.
Many of the animals are symbols.
The elephant, the memory, the huge innocent pachyderm.
The beautiful giraffe, no matter how high she has stretched, still holds her elegance. The dog, the friend.
Memories from travels up in the Alps, black years full of anxiousness, agony and drugs. The city nevertheless remains the same.
Family, my son, home.
Home as a new symbol.
Like a cross for the believers.
Breaking Bad said it best: ‘Family, what else is out there?’
Notes from summers full of anarchy and conversation.
In the park of Attica I once saw a big box full of holes saying: ‘contains live animals.’
What could have been in there?
Such a joyful sight!
Felt like listening to the sounds of the jungle, the tweets, the moans, the howls.
All is random.
Tic Tac Toe is random, in death you always lose, only if you’re out of the game you forget about it all.
The ladder is a symbol of a dream, good or bad, might be black and going down, might be beautiful and going up.
The bricks of which the city was built. Of which we were all built.
The cartoons that never die.
Coyote is falling from a 100m cliff and comes back pissed, just with a head bump.
TNT explodes on his face and he comes back pissed, just black from all the smoke.
Is ambition real or just a form of desperation?
The chauffer in the painting is me again, together with me, the Indian.
Distant memories, full of voices and mistreatment in the fucking family.
Is this painting happy in the end?
Is this what we’re looking for?
I used to love Basquiat, now he doesn’t move me so much.
Not his paintings, just his position in life.
The hard part is to survive, to adapt, to go on.
There we go with Darwin again!
The black cloud seems nice, the clouds are part of this world, they water and feed the earth, the sky becomes clear again and so the story goes.
A shoal of fish is swimming lazily in the total quiet of the depth of the sea.
Just looking at them with a mask, like a rookie Buddhist, makes me feel as if I was a part of the water, the mother of us all.
The clock is going tic, tac, tic, tac, all the time, time counts backwards.
The Stones said it: ‘Time is on my side.’
Oh!if only!
Tenderness.
The alphabet can’t tell us everything.
What’s in the little box?
Out pops a fist from a cartoon. Or a present.
In a wall I read once ‘Our only hometown is our childhood’
It’s a roll of dice thrown by someone else, a deck of cards that was just handed to you. You play along.
Many have lost with two aces, other have won with a three and a two.
But what is ambition really?
What I make in a year, others make in the stock market in a single day.
Will anyone remember that law on the banks and the immunity that went hand in hand with it?
Fuck it.
The stupid little tags on products flashing ‘NEW’ are not anymore depressing, ever since my son arrived.
They are euphoric, beautiful!
The overlayering of paint on the canvas makes me wary, I’m tired of it.
It’s useless.
I found my joy in oil paint, the colors take their time to dry and they respect one another. Color is emotion.
I make utopic worlds now, without erasing anything.
And little iron sculptures that spurt out of the paintings as entities of their own. Evolution and adaptability is everything.
Everything changes.
And one should be optimistic.

Nikos Lagos is one of the most prominent artists of his generation. He was born in Athens. Studied at Athens School of Fine Arts. He is also Architect and Engineer from NTUA. He has taken part in many group and solo exhibitions in Greece and abroad. His paintings exist in private collections in Greece and many countries in Europe. 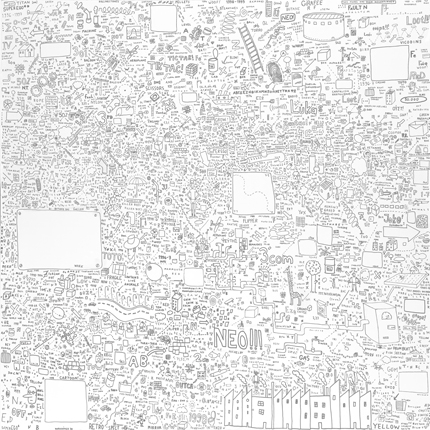